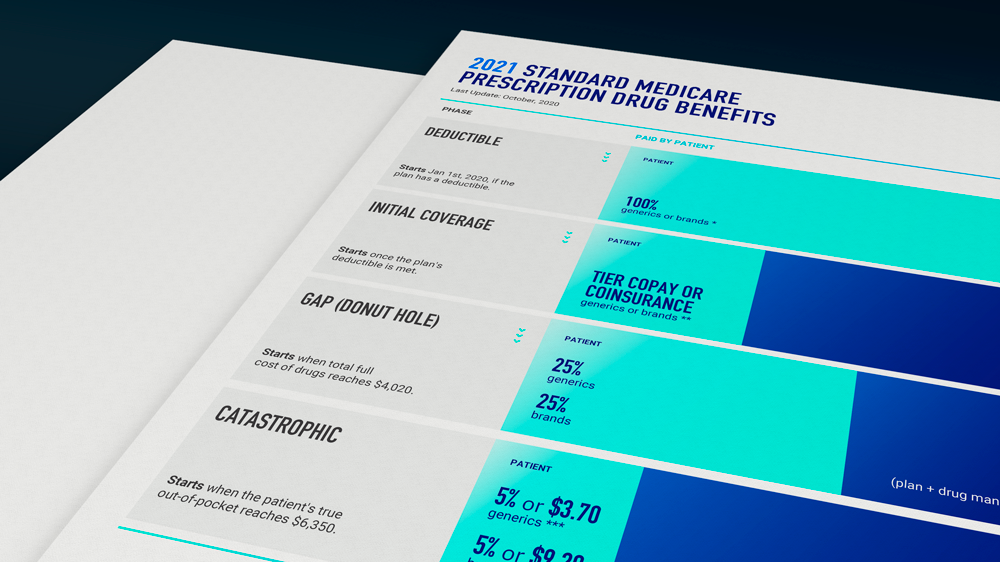 The deductible is the amount a patient must pay for health care or prescriptions, before Original Medicare, their Medicare drug plan, their Medicare Advantage plan, or any other insurance plan begins to pay. Traditionally during the deductible, patients will pay 100% of their medication costs until they reach the set deductible amount. These amounts can change every year.

Oftentimes Medicare plans will cover part of (or all of) the costs for certain tier medications, even if the patient is technically in the deductible. In these cases, the drug costs do not count towards reaching the deductible limit. Amplicare accounts for these cases. Learn how to identify these cases.

Once the yearly deductible has been met, patients pay a copayment (a set amount) or coinsurance (a percentage of the total cost) for each covered drug. During this phase, the patient and the insurance plan share the cost of medications until the shared total equals a certain threshold. What the patient pays during initial coverage depends on their insurance plan, the tier of the medication, and whether the pharmacy is preferred or not.

The coverage gap begins once the shared cost of drugs equals a certain limit. In the donut hole, patients pay a more significant percentage of their drug costs. This phase ends when the patient's out-of-pocket cost reaches a certain limit. What the patient pays during the coverage gap is more standard across different plans and across different pharmacy networks. This means in most cases a patient's drug costs will be the same at a preferred (i.e. mail-order) vs. non-preferred pharmacy.

In 2023, patients will not pay more than 25% of their drug costs during the coverage gap / donut hole for both brand-name and generic medications. A 25% coinsurance is equivalent to the maximum amount a patient could pay during initial coverage, prior to reaching the coverage gap. Learn more about the donut hole closing.

Once a patient reaches the "true out-of-pocket" (TrOOP) threshold during the coverage gap, he or she automatically gets "catastrophic coverage." It assures that once a Medicare patient has spent up to a certain limit for covered drugs, they only pay a small coinsurance amount or a copayment for the rest of the year.

In 2023 the TrOOP threshold is increasing significantly to $7,400, which is over a $1,000 increase compared to 2020. This means patients will remain in the coverage gap ("donut hole") for a much longer period of time before they transition to catastrophic coverage where their copays are minimal.

In Amplicare, some months may be marked "Transition". This isn't a specific phase of coverage, it simply means the patient is transitioning from one phase of coverage to the next during that month!

Have drug costs changed for a patient even though they haven't transitioned into a different phase of coverage? This article will help answer your questions!