Why is my patient's out-of-pocket cost for a drug so high?

Written by Ashley Hunt
Updated over a week ago

What is a formulary exception?

A formulary exception is one kind of coverage determination process where an enrollee or their doctor can request an off-formulary drug to be covered for a patient. This process can also be used to obtain a formulary drug that is subject to utilization management restriction-controls that a Medicare Part D plan can place on prescription drugs when the enrollee’s physician does not believe should apply to his/her patient.

Some situations where a formulary exception may be requested:

A formulary exception will be granted when a plan sponsor determines that a requested drug is medically necessary for an enrollee and there are no covered alternatives. The enrollee must submit a request and his/her doctor must submit a supporting statement claiming that the drugs preferred by the plan are not sufficient for his/her patient and that the non-formulary drug is necessary in treating the enrollee's condition. The plan will have 72 hours from the time it receives the request for an exception to determine if they will cover the drug. In expedited cases, the plan will have 24 hours to make this decision.

Plans may vary in their exception request processes, so it is important to advise your patients to reach out to their plans if they are interested in submitting either a formulary or tiering exception request.

What is a tiering exception?

A tiering exception is another kind of coverage determination process that should be requested when an enrollee needs to obtain a non-preferred drug at the lower cost-sharing terms applicable to a preferred tier on the plan's formulary. This is different than a formulary exception in that the enrollee must obtain a drug that is on the plan's formulary, but at a cost he/she cannot afford. Like in the case where a formulary exception is requested, the drug in question must be medically necessary for the enrollee. That means that an enrollee and their physician must prove that drugs on the lower tiers are ineffective or dangerous for the patient.

If your patient's insurance plan does not approve a request for  exception there are five additional levels in the appeals process a patient can embark on.

In most cases an appeal will not even be necessary. If a patient must appeal the original determination made by the plan, it is expected that his or her issue will be resolved in the first or second step in the appeals process.

How this impacts the pharmacy: 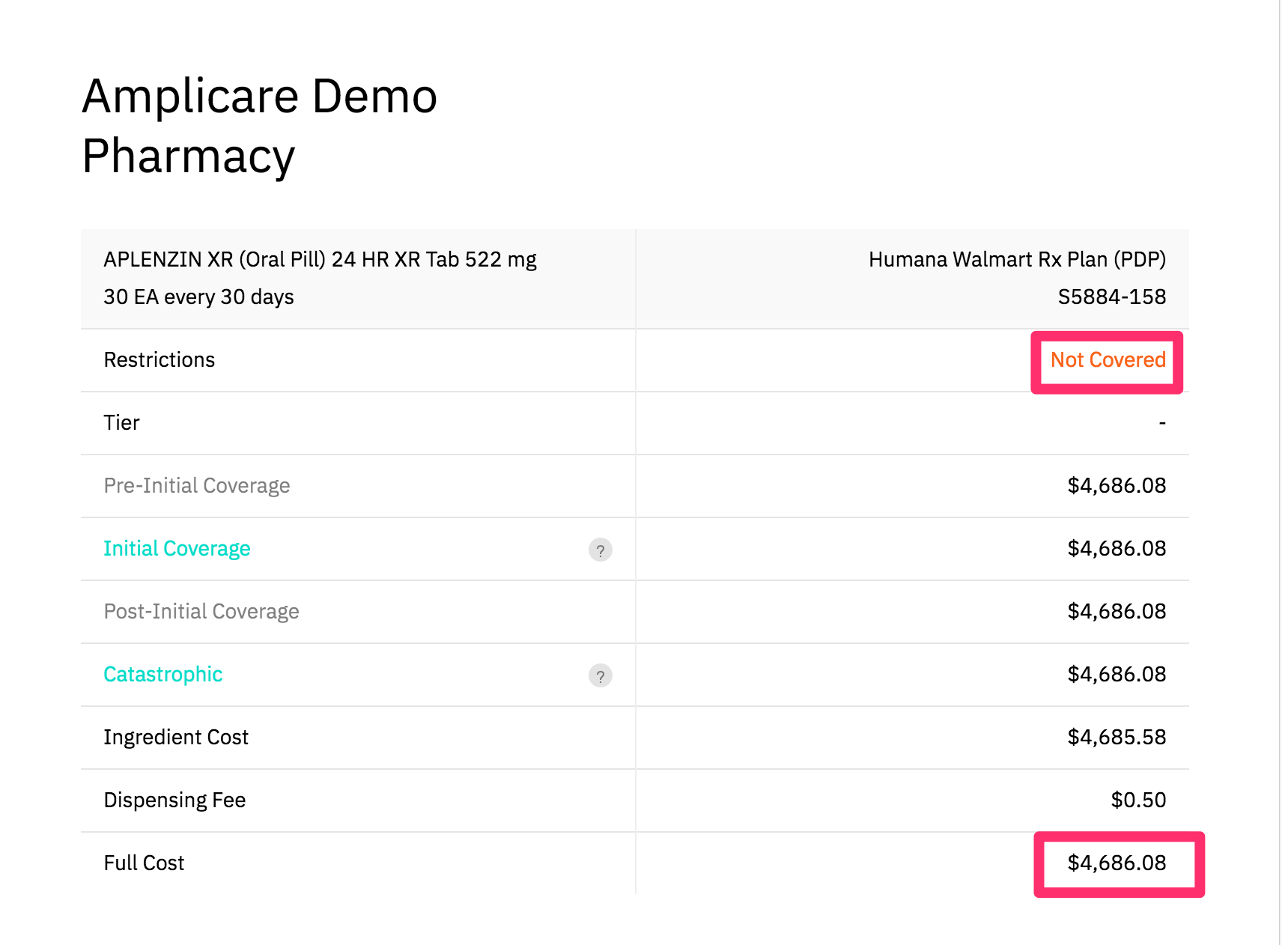 Although there is no evidence in the form of tags or alerts confirming that this patient has a formulary exception, we can infer that he/she does and that he/she is NOT paying the full price listed in Amplicare. Another way you may detect a patient with a formulary exception is locating a major price discrepancy in drug cost and pharmacy reimbursement.

Formulary and tiering exceptions are common in cases of patients who are dual eligible or those who receive additional assistance with premiums and out-of-pocket costs. Be aware of a patient's subsidy status when confronted with these high drug costs because this can help identify if a patient has been granted a coverage exception. It is good practice to use our Check Plan or Subsidy tool to ensure that the patient's subsidy information you have is correct and you can always call a patient's plan to confirm that he/she has received a coverage exception.

Additionally, in most cases, patients who are dual eligible and are receiving extra help are not required to pay high cost-sharing, meaning that they are protected from paying at the standard cost-sharing levels for higher tiered drugs. For example, a patient who receives extra help may have been granted a tiering exception for a Tier 4 drug and will be paying the standard cost-sharing for that Tier 4 drug at the cost-sharing for a Tier 2 drug. Again, this exception will not be highlighted in Amplicare and it will appear that the patient is paying the higher price.

You now know one common explanation for why your pharmacy appears to be getting under reimbursed. Here are the steps you can take when you are not getting fairly compensated for certain drugs.